Early on Saturday morning, the weak warm sector of a cyclone passing over Lake Erie will force winds to shift south, then southeast, east, then possibly northeast as an area of low pressure will intensify off the mid-Atlantic coast. Precipitation will likely start as light snow between 6AM and 9AM on March 18th for parts of New Jersey. The NAM 12Z initialized for 12Z on Saturday shows the potential of snow in northern New Jersey, an area of sleet in central New Jersey, and rain for most of south Jersey.

A forecast sounding for the area of sleet/freezing rain. The NAM expects frozen precipitation until melting occurs in a layer of warm air just above the ground. The distance between this warm layer and the ground does not appear sufficient for a refreeze. Therefore, sleet is unlikely in the transition zone in the morning. The threat of freezing rain can not be ruled out for Saturday morning in parts of the transition line between rain and snow. If temperatures at the surface are at freezing or just below freezing that morning, this will be a hazard. 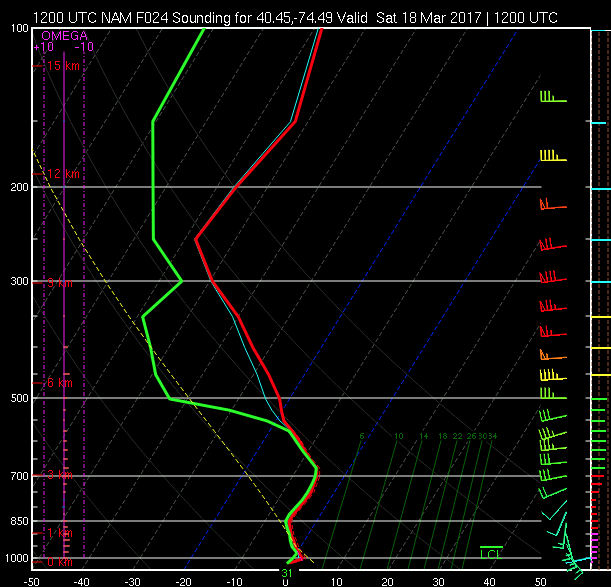 A forecast sounding just north of this sleet area shows the atmospheric column is completely below zero, favoring clumpy, wet snow in the early morning. I would expect this very wet snow line to extend slightly further south in the morning.

Temperature advection in the lower layers of the atmosphere will likely be the downfall of liquid precipitation during the day on Saturday, as southerly winds from 925mb-700mb transport very warm air northward. This in addition with the warm March sun will make snow accumulation difficult between 8AM and 4PM for all of New Jersey. Rain should be the dominant precipitation type for central and southern New Jersey throughout Saturday, limiting accumulation there.

The atmospheric sounding along this line shows healthy upward vertical motion throughout the entire lower atmosphere and a thermal environment very close to freezing until the surface, which will be 34-37F depending on exact location. Warmer surface temperatures will make accumulation difficult in central/south Jersey unless a frontogenesis band sets up and intensity driven snowfall accumulates. North Jersey will already have experienced snow accumulation by this time, so additional snowfall will have no difficulty accumulating. Progressing through Sunday night, temperatures will fall rapidly throughout the atmospheric column and a changeover to snow will occur from north to south. Lingering warm air around 850mb presents a sleet hazard, that is if air is warm enough to melt liquid precipitation, and then a refreeze occurs before it hits the ground. Both the GFS and NAM show warmer temperatures around 850mb, so this thermal feature will need to be watched closely. Ultimately, this thermal ridge will propagate west as colder air moves into the atmospheric column, but the timing of this propagation determines the exact precipitation type for much of central New Jersey on Saturday night. 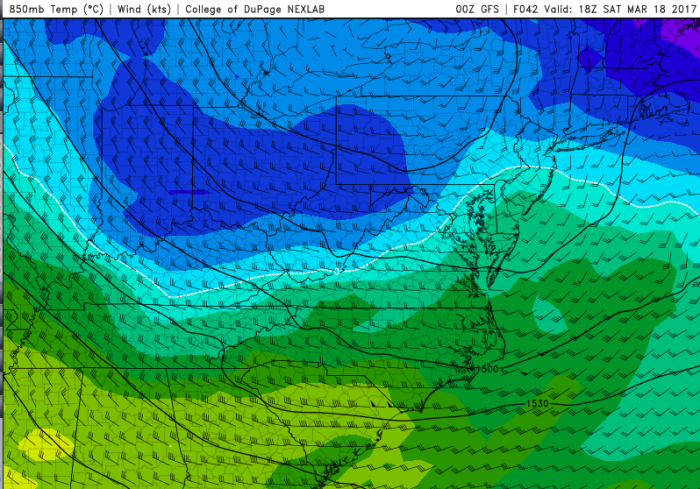 Once the changeover to snow occurs from NW to SE, snow will continue to fall throughout the state through Sunday morning, ending between 8AM and 10AM. The possibility exists for very heavy snow on the back end of the cyclone wraps around very cold air and frontogenesis forcing plays a role. Clearly, snow accumulation is extremely sensitive towards the precipitation type and the thermal environment, as this determines snow to liquid ratio. Comparing the NAM and GFS QPF shows small differences in total precipitation reaching the ground:

What can go wrong?

The cyclogenesis of the coast will be very weak, so slight differences in strength will dramatically alter the thermal environment and can shift the rain/snow line 15-20 miles. Fortunately, we are not expecting 1.5″+ of QPF, but instead 0.7″ at a max with low ratios, so the most snowfall we can expect is in the 6″-7″ range, and that is under ideal conditions. A shift in the formation of the cyclone will alter where the warm layer at 850mb is spatially located which can also influence the rain/snow line and put one area on the wrong side of the gradient. Overnight temperatures on Friday-Saturday will be key to understanding how the evolution of precipitation type plays out on Saturday morning.

The National Weather Service shares my concerns and so to supplement this summary, I will share their forecasts.